Very soon we get to meet our new baby. Even as I write that I can’t quite believe it.

It has crept up on us; we haven’t been focused on the growing bump with the same intense scrutiny as the first time.

Is it always this way after number one?

Having the distraction of a two year old boy whirlwind has a lot to do with it. And the fact that we spent November to March having our loft converted to turn our two bed terrace into a home big enough for a family of four.

There has been precious little time to pause and take stock, to acknowledge that three is about to become four. And that our family will be complete.

Yes, unless there is an accidental addition, we are stopping at two.

Why We Are Stopping At Two

There are lots of reasons; our advancing years, money, and time (to give to being parents, to work, for each other) are all factors. For me being a family of four feels like a good balance.

There is of course no right number. For some reason how many children to have or whether you have them at all gets some people very worked up.

The answer is that it’s whatever works for you, and it shouldn’t matter to anyone else.

Alas, I was an only child. So I am excited at having the chance to see Little B have a sibling relationship. If we hadn’t had another baby I expect, like me, he would have been happy on his own.

The reactions I’ve had over the years to announcing my lack of brothers and sisters have been frequently odd, often pitying: “How sad, how did you cope on your own!?” Answer: I wasn’t brought up in an isolation tank barred from contact with all other children in the local area. Contrary to popular belief only children are not all socially stunted, shy, insecure psychopaths!

Of course, you only know what you know. You can’t live out the alternative paths in life so it’s only through observation and imagination that we can experience family dynamics different to our own.

I’ve seen friends who no longer speak to their brother or sister, and I’ve seen very close relationships between Mrs B and her brother and sister (yes, she is one of three).

And my brother in law has three boys of his own and that looks, from a safe distance, like mayhem. Happy mayhem I am sure, but very little time for anything else.

We hope that our boy grows up happily with his sibling, occasionally squabbling but basically being good pals.

Does Little B know he’s about to have a sibling? Someone to compete with for his mum and dad’s undivided attention? I doubt it.

Yes, he points at the bump and says “Baby” (because we’ve told him that’s where the baby lives). And we were given a book called ‘There’s A House Inside My Mummy’. It’s given me an idea for a new TV programme that I am pitching as Grand Designs meets One Born Every Minute.

We also bought a toy baby to practise with. For him, not us. We know (or at least claim to know, somewhere in the mist of our brains) how to look after a baby.

And the pretend baby/toddler bonding experience has been an interesting and at times, scary, insight into a two year old’s world view.

Little B has veered between indifference and fascination. Between wanting to look after and feed the baby one minute and an impulse towards extreme violence the next. 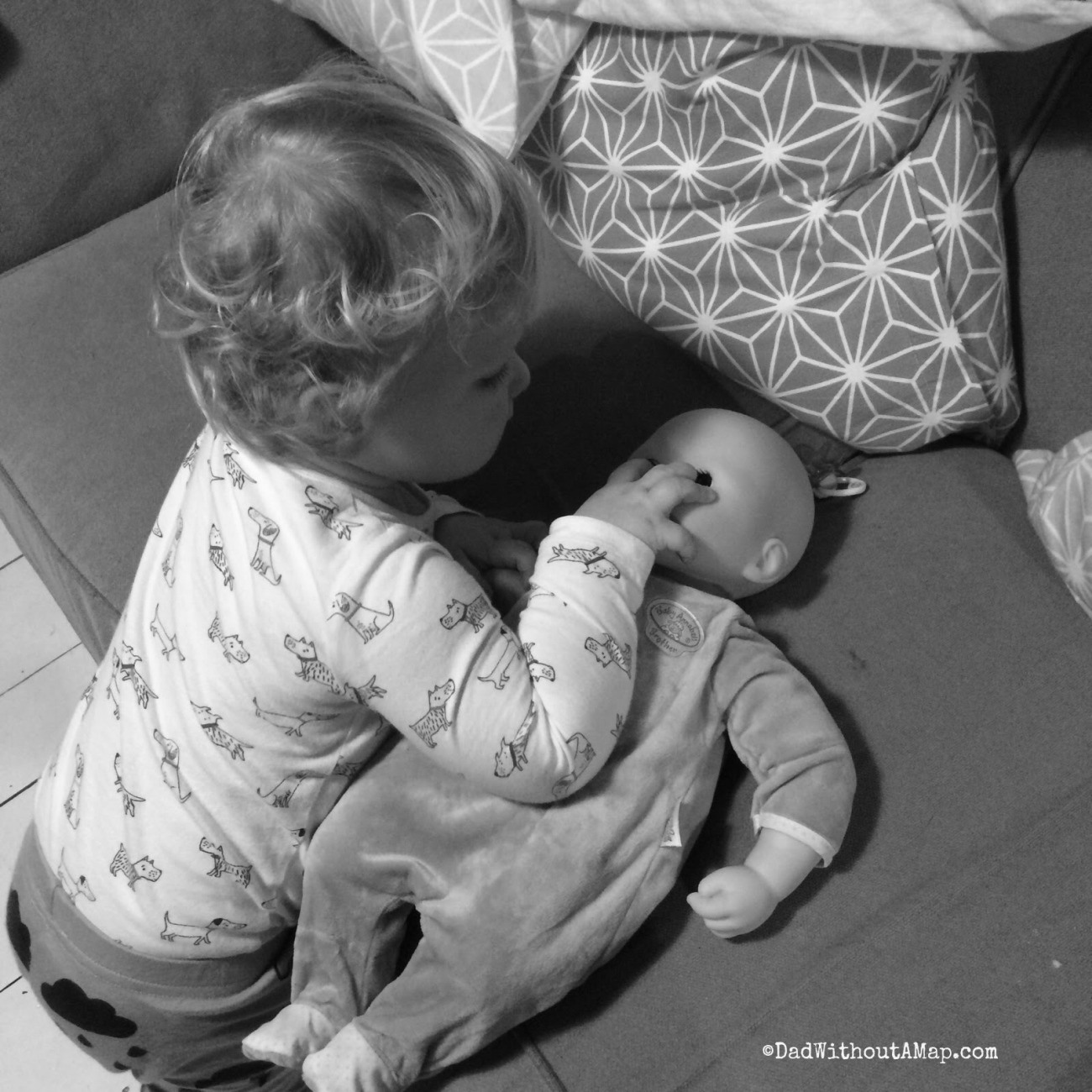 I expect we will need to keep a close eye on him around baby for the first few weeks. But I do think he will enjoy being a big brother once he gets over the initial shock and jealousy. I am currently reading Toddler Taming and paying close attention to the section on introducing a new baby.

As for how I or Mrs B feel about becoming parents again, like I said we haven’t really had time to think about it. But we were so panicked the first time round I think a bit of laid back attitude is a good thing.

We will have to fit the baby in to our already packed schedule. I’ve been told that second babies have to either battle for attention or play it cool themselves. I do hope baby is laid back.

We’ve said things like, “Will we love this baby as much as Little B?” Ridiculous I know but you say stuff like this late at night; waking your other half up to tell them your fears doesn’t always go down well.

Of course there will be plenty of love to go around. Humans are capable of infinite quantities of emotion. And there is

I know we’ll appreciate the experience more second time around. We know what to expect and we know we aren’t doing it again. And we know how fast the days go by.

How fast Little B went from this… 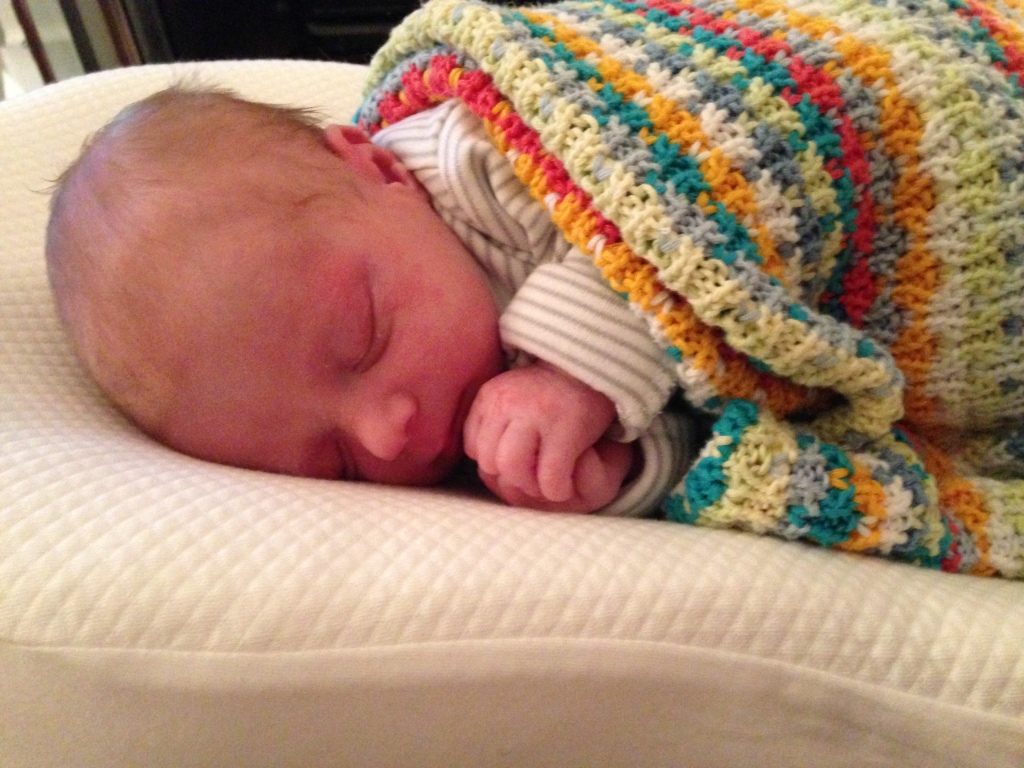 So I promise that at 3am when we haven’t slept for days I will not wish for him to be older. I won’t wish for the next stage, because I now know every stage goes so fast and each has its joys and woes.

And I know now that being a parent really is about the journey, not about getting somewhere. So we’ll breathe it in and hold on to every moment, one day at a time.

Mainly I simply want everything to be well. And that Mrs B has a better birth experience this time around. The last time wasn’t great.

Other than that…I just can’t wait to meet our new baby.