How many of you still get visit your childhood home? How does it feel to go back there?

In these days of mobility and housing ladders most of us will move house several times in our lives.  Your own parents may have also moved around a bit, when you were little and after. But mine stayed put.

My parents bought a house when they were married and they never moved again. That was in 1968. Yes, that’s forty-seven years ago. Kirsty and Phil would be out of a job if everyone did that!

I lived in the same house all through my childhood, went back there during the University holidays, and I’ve been visiting from London ever since. And now I’m taking our boy there to see his northern Grandparents.

The house is in Newcastle on Tyne; home of Magpies, stotties, a rusty Angel, The Animals, long-lost miners and shipbuilders, a famous bridge copied by the Aussies, George Stephenson, Alan Shearer, The Likely Lads, and lots of canny folk. Little B is a bairn up there. I feel more like a tourist!

Little B won’t remember his visit last year when he was tiny and he’s still too young to understand where he is. Next year perhaps I’ll be able to say: “This is where Daddy grew up.” Maybe. Mebbees not.

Home takes on new meaning when you have a child. I’ve lived in eight rental properties during my time in London before finally getting on the property ladder in my forties. So I don’t think of any of those places as homes. They were where we lived for a time and I was lucky to have a roof over my head; plenty don’t. But they never felt like home, probably because we never lived in any of them for more than two years. Home was always in the North East not the Capital.

“When are you coming home?” my mum would say. “Are you going home this weekend?” people would ask. “How was the trip home?”

At first it felt natural, comfortable, like wrapping up in an old jumper, settling into the sofa (or settee as Mum insists on calling it). Then as years turned to decades it felt more like finding that jumper at the back of the wardrobe, trying it on and discovering it had holes in it.

I still say dinner not lunch. Bath not barth. And sometimes bread buns not bread rolls. But over the years aye became yes as the not that strong accent got flattened out. I started eating ciabatta and rocket. I went undercover as a Southerner. I can still stand outside the pub in a shirt in winter mind, but I’d be on my own!

Of course, these days you can buy ciabatta in The Toon. As most people know it’s a modern stylish, artistic city, but it still feels other-worldly, stuck out on the edge of England, its castles ready to hoy Scots back awwa tha border, bare hills and moors and miles of golden beaches, howling and desolate in winter and glorious in summer.

I had a wonderful time growing up there. It was a great place to have a 70s and 80s childhood; playing out in the street from breakfast till tea time at weekends, and later on cycling with my mates to Whitley Bay to play on the arcades, or off into the woods to build dens and play a game we called “Hallars” that was a risk-taking cross between hide and seek and tag.

I can see now it would be a great place to bring up children. As soon as we got off the train after our long journey north the air felt different, as it always does, the tension just isn’t there the way it is in London. So we tootled off to our Air BnB in Jesmond and marvelled at the lovely big houses we could buy for the price of our tiny terrace. And as we always do, for a few hours we said:

“Shall we move up north?”

We visited old friends, went to Heaton Park and Jesmond Dene with my mum and dad, and got the Metro to my old home in Forest Hall. It felt a bit like an out of body experience seeing Little B walk down the garden path and into my old front door. I think because with his blond hair he looks a lot like me when I was little. And I wondered if the time had passed so quickly for my mum and dad, if it seemed like a heartbeat since he was me?

I stood in my old bedroom and looked at the stained glass window that I woke up to every day for eighteen years. 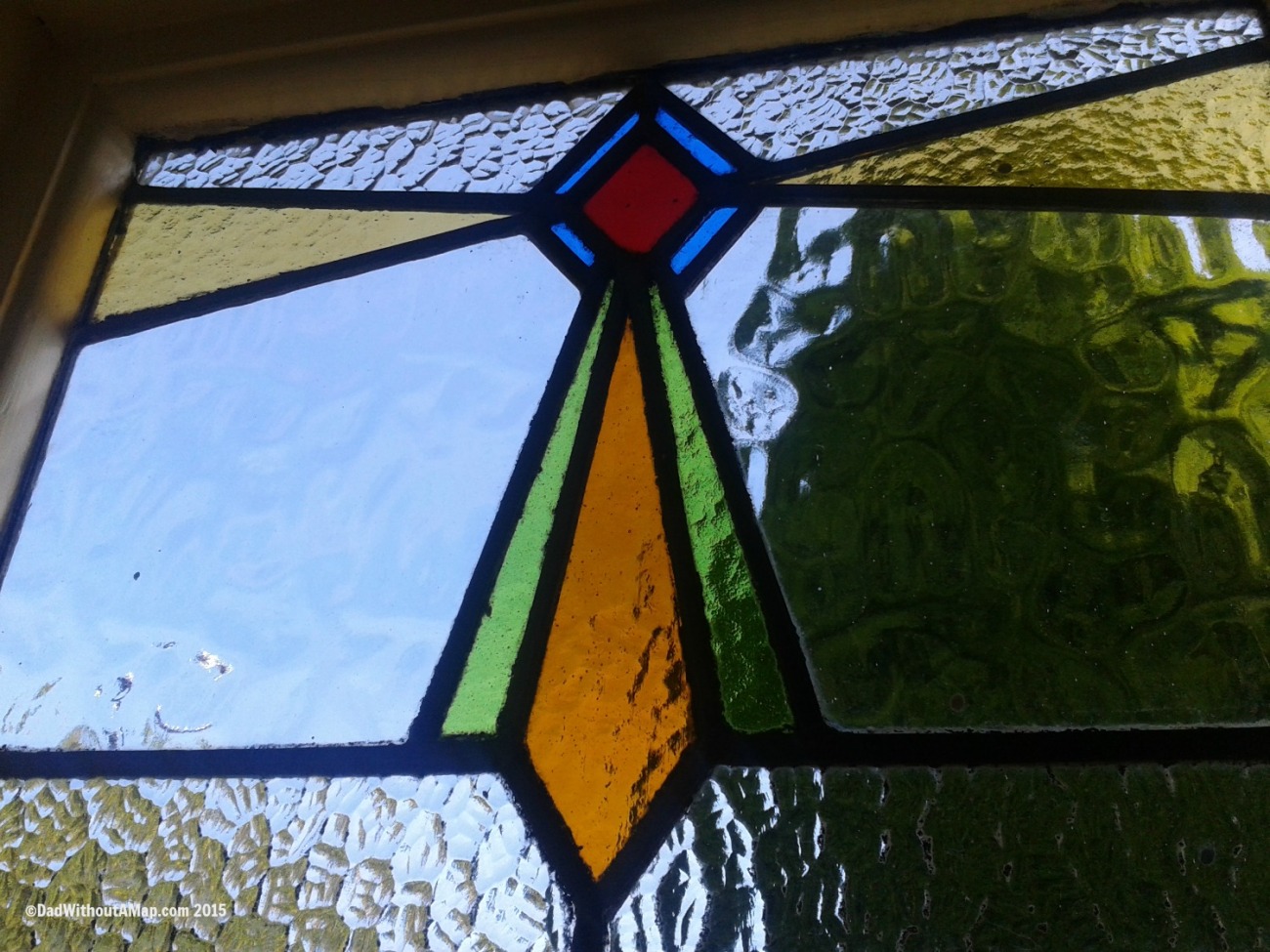 I felt glad to be able to come back and for Little B to see where I came from, but I know it isn’t the same place. Because the house might look similar but a place exists in space and time. And time moves ever on.

Don’t get me wrong, we had a lovely time. And it’s so nice to see Little B with my mum and dad; there are times when the distance is hard, for them more than me I think. Newcastle is a fantastic place to live, but weirdly I think there are too many memories there. So I don’t think we’ll be moving back there, despite the presence of Carluccios and flat whites and friendly people and good value houses.

Because the home where I grew up isn’t really there. And seeing the past everywhere only made me long for the present. Because my parents are getting old, and my old friends have grey hair (which reminds me of my own!), and a lot of the places we used to hang out have gone, pubs turned into flats, fields into housing estates. And standing in the garden looking back at the house all the years came rolling into my head like starlings wheeling in the evening sky.

And I realised I wanted to go home.

And if you had asked me where home was I would have told you of a higgledy-piggledy terraced house in South London, and our little boy running about in the garden, chasing our cats and shouting “Twaaaiiin”, while we sit on the decking, sipping a glass of wine, with the still warm sun setting over the Victorian chimney pots, and the roar of the crowd at Selhurst Park to sing us off to sleep.

We have a new home. And I know Little B is going to love it, just as much as I loved mine. 🙂

Big superhero has been away all week with his grands as he's betwixt nursery and school. Feels like he's going to come back more grown up and ready for his new career next week. The little superhero has missed him but enjoyed the extra attention from mamma and dadda. Looking forward to being reunited as a family tomorrow!
Today we went to Hobbledown Farm for what is becoming an annual trip. Each time Billy discovers something new he can do. Our first visit he was only 18 months and basically toddled around the sandpits and pointed at some rabbits. Then when he was two the soft play really won him over. And last year it was the Crystallite Mine (finding treasure in the sandy tunnels). This year he was joined by Frankie in full on two year old explorer mode for the first time and for a brief time the two brothers were off entertaining themselves. I almost felt lonely. But it wasnt long before someone fell/spilt something/got stuck. See you next year for zipwire hijinx Hobbledown?!
Counting down to the big boy starting school. I can see his freedom vanishing and he's oblivious. But for now we have Wednesdays as the three amigos and today we caused chaos at Eltham Palace. This was a rare moment of calm to savour!